In a nutshell – as part of the Ikea LiveLAGOM project we were invited to make draft excluders from fabric scraps. Here are the instructions for a double one that moves with your door.

There are huge gaps under the door of my living room. It is a rickety Victorian house with no right angles and lots of drafts. It has been a particularly cold February and despite curtains at the front and back door all the winter seems to get through this gap. I also really need to repaint the woodwork!

With perfect timing we got invited to an Ikea LiveLAGOM workshop and we got to make sausages that block out drafts! Because I’m a bit of a lily guilder and because I knew what we were going to make, I did some pre-workshop Googling and found out that you can make double draft excluders that don’t need to be put back all the time. They move with the door!

They are easy to make if you have access to a sewing machine, although I know that a lot of the Ikea stores ran workshops where they hand sewed them! Mine is patchworked together with no consideration for the colours of the front room. It really does not go with any of my decor but it works brilliantly. Using a thicker furnishing fabric will make it look less lumpy than using thin material although my teenager made his from fleece and that worked beautifully!

For the single draft excluders it’s just a matter of sewing a long bag and turning it inside out. For the double one you need to make 2 channels for the stuffing. You can stuff with almost anything that is made of fibre. Old clothes or stuffing from old cushions both work well. Ikea let us open up brand new pillows which at £1.10 a go are a really cheap way to get stuffing!

The double draft excluder works both ways up so you could easily make it in different colours to suit your mood. I’m assuming it’s going to be washable on a gentle slow wash.

If no one shoots me right now for mentioning the C word, these would make wonderful festive presents! Mine took about an hour and a half to make because I spent a lot of time swearing at poor old sewing machines that had never been serviced. If you didn’t bother with the patchworking and used one big bit of material I think you could make one in around half an hour. 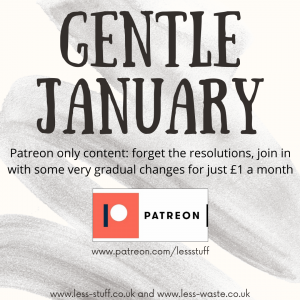