I live near a very long street which has a long term problem of fly tipping and littering. Our local magazine, Up our Street called me in to do some freelance design work. They were working with Bristol Horn Youth Concern to solve the local litter problem. They wanted me to design a flyer that made it easier for people to understand when the waste collections happen. The back of the flyer was to be in 3 languages and have a clear warning about fines for dumping waste. They had a very quick turnaround time and this job had to be done fast to fit in with the funding.

Quite recently I did an old lady thing and reprimanded a couple who stood right by a bin and threw their fag wrapper on the floor. It was when I was shouting ‘next time you want to see a doctor remember the funding has been spent on clearing up after you’ that I realised people don’t get it.  I also realised I needed a snappier roast!

Litter is seen as someone else’s problem. People don’t seem to get that Bristol City Council have a finite pot of money and diverting it to clearing up waste means something else suffers.

I’ve lived here for and complained about the litter for 20 years. I wanted to try something totally different. Inspired by reading about IDEO’s strategy of Design Thinking which was in the reading list for the MA Design I start in September, I suggested we try a different angle; let’s celebrate what is good and bring some love back into the area. Up our Street were open minded about my ideas and to make it possible I worked on a pay what you want basis. Our one flyer became a rebranding project with 2 flyers, posters for residents and shops, a large banner and pavements painted with flowers. All these ideas are relatively cheap, low risk and easy to test. They may not work but what was happening before didn’t work either. 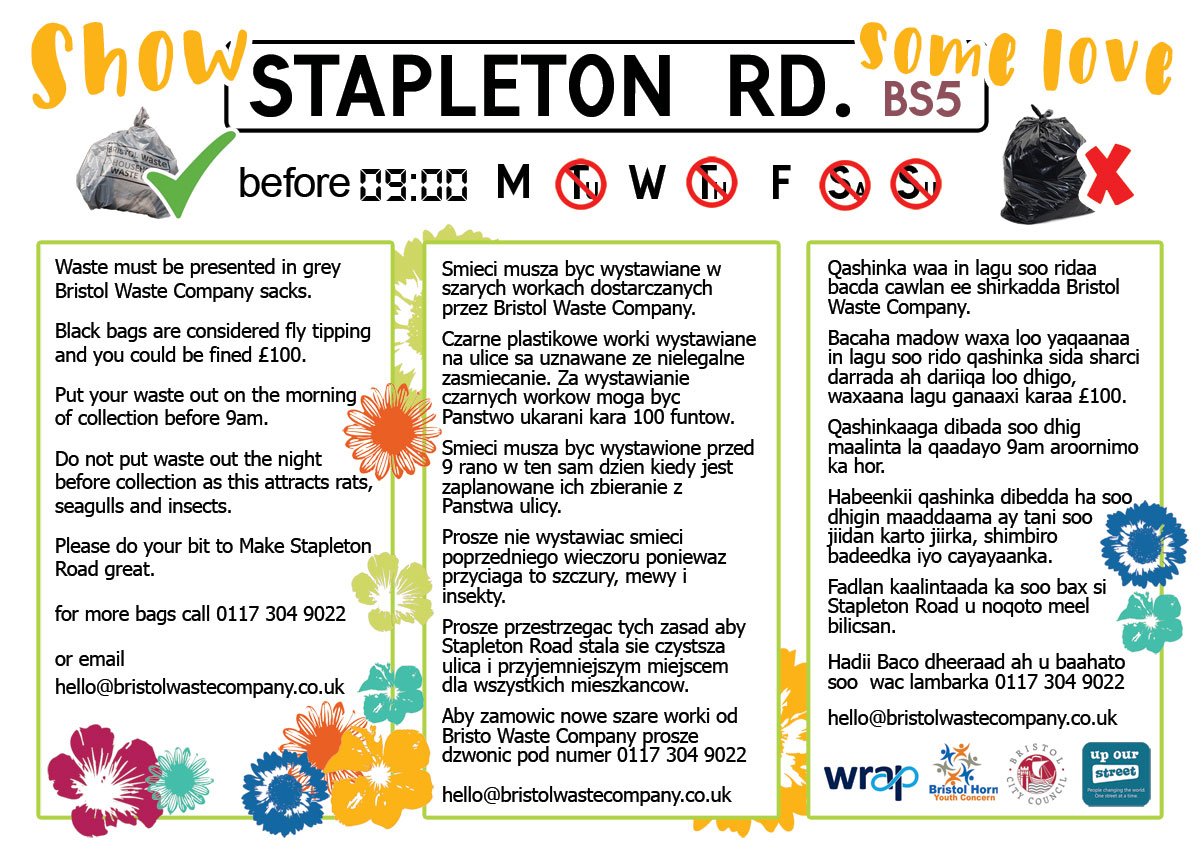 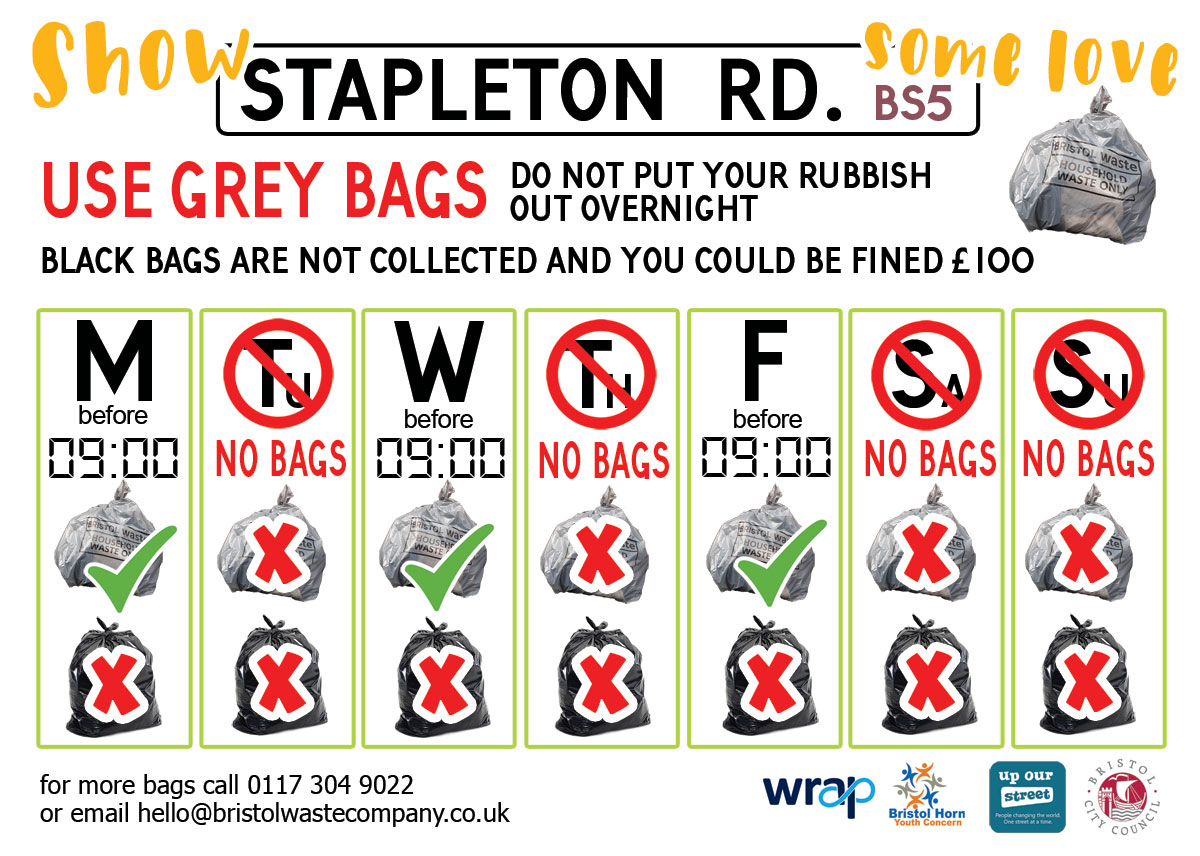 Show it some love

My first logo idea had the tag line ‘Make Stapleton Road Great’ which was fine until someone pointed out it was a bit like a Trump logo. Logo two; ‘Show Stapleton Road some Love’ was a bit better and it is what we are using. I wanted something uplifting and happy, so I chose bright colours and flowers as a theme. This logo is being used on t-shirts for litter pickers and there is a banner to come. 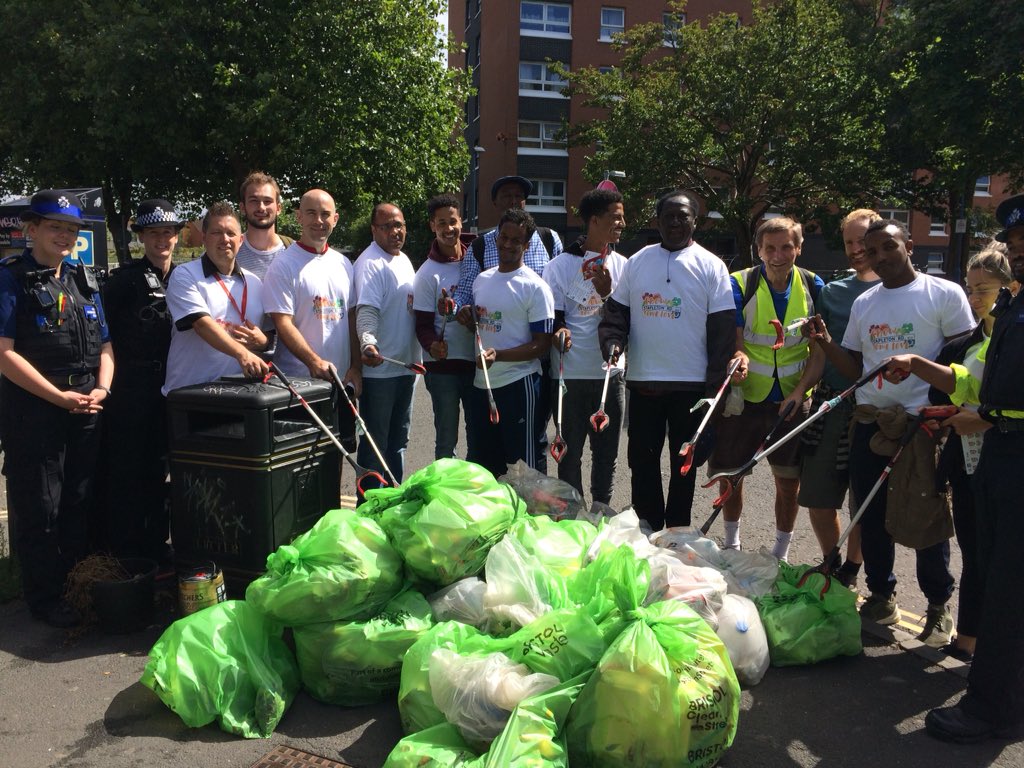 Do people tip where it is pretty?

Stapleton Road is long and filled with local shops including many takeaways. A lot of the shops have industrial wheely bins and occasional street corners have litter bins. The bins attract sofas, fridges, broken black bin bags and all sorts of rubbish. What if the area around the bin was pretty? Would people still fly tip there? As an experiment I’ve taken the flower element of the logo and with the help of The Factory at Knowle Media Centre turned them into stencils. The flowers will decorate the pavements and form pathways from takeaway shops to bins. Local cafes love this idea because some have seating outside and it will make the area nicer looking.

The original idea was to get local children to do the spray painting but the summer programmes were already decided. In the future, getting local kids to prettify the area in a fun way will help, in my experience of doing community artist work, anything that kids do, the families protect. The stencils are made of tough stuff, designed to last so I’m hoping that local youth groups will take this on in the future. The chalk paint will last up to 6 months.

To make this project happen I had to donate a fair bit of volunteer time. Part of that volunteering was spent talking to neighbours, shopkeepers and road cleaners. It was important to me to find out what people thought would help and I wanted to check I was identifying the right problem to tackle. I won’t be paid to stencil the pavements but that is going to be fun!

One element of my volunteer time was designing and making posters to give to people who take care of their properties.  It worked out better that this was done as a volunteer because I could say to people it was from a neighbour as a thank you. It comes better that way than from the council or Bristol Waste. It is a happy thing, knocking on a strangers door to say thank you. I have totally enjoyed giving posters out. 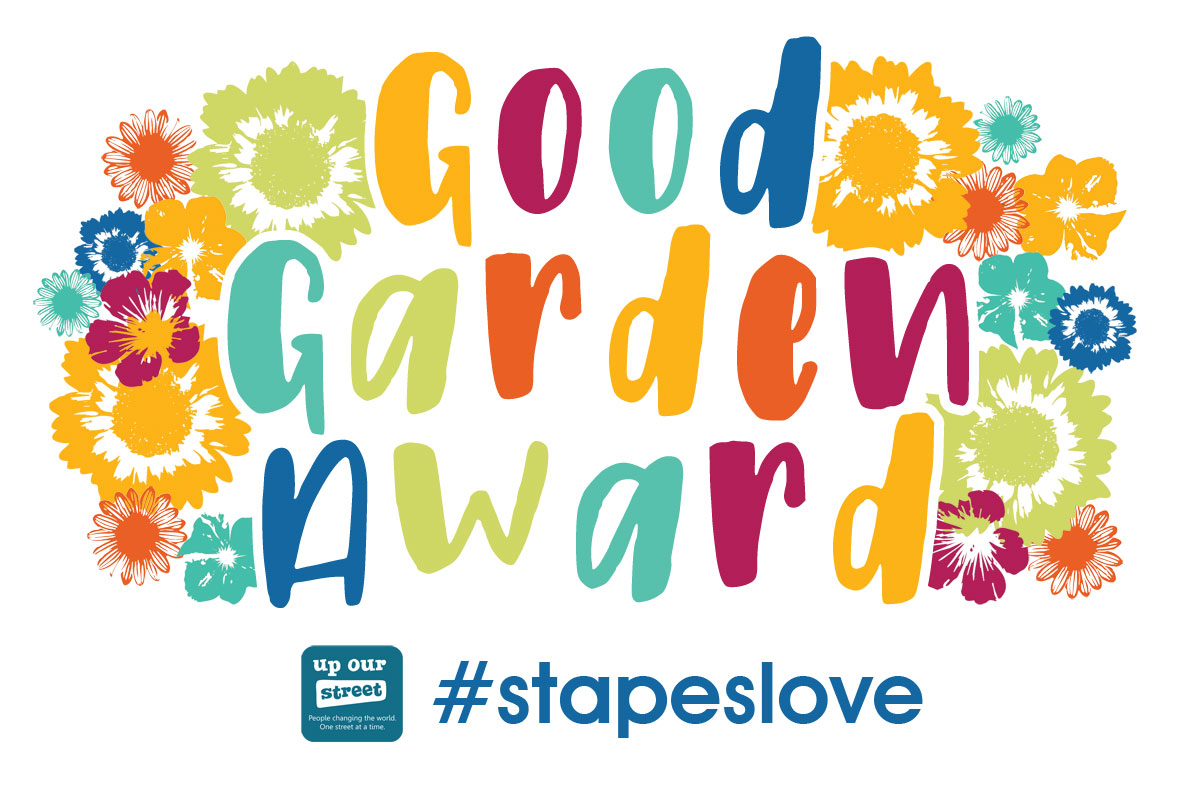 How can success be measured?

As far as I’m concerned, the positive feedback from neighbours and local shops who have been given the Tidy Street and Good Garden Awards makes this a success already. If the litter and fly tipping rates drop that would be wonderful. 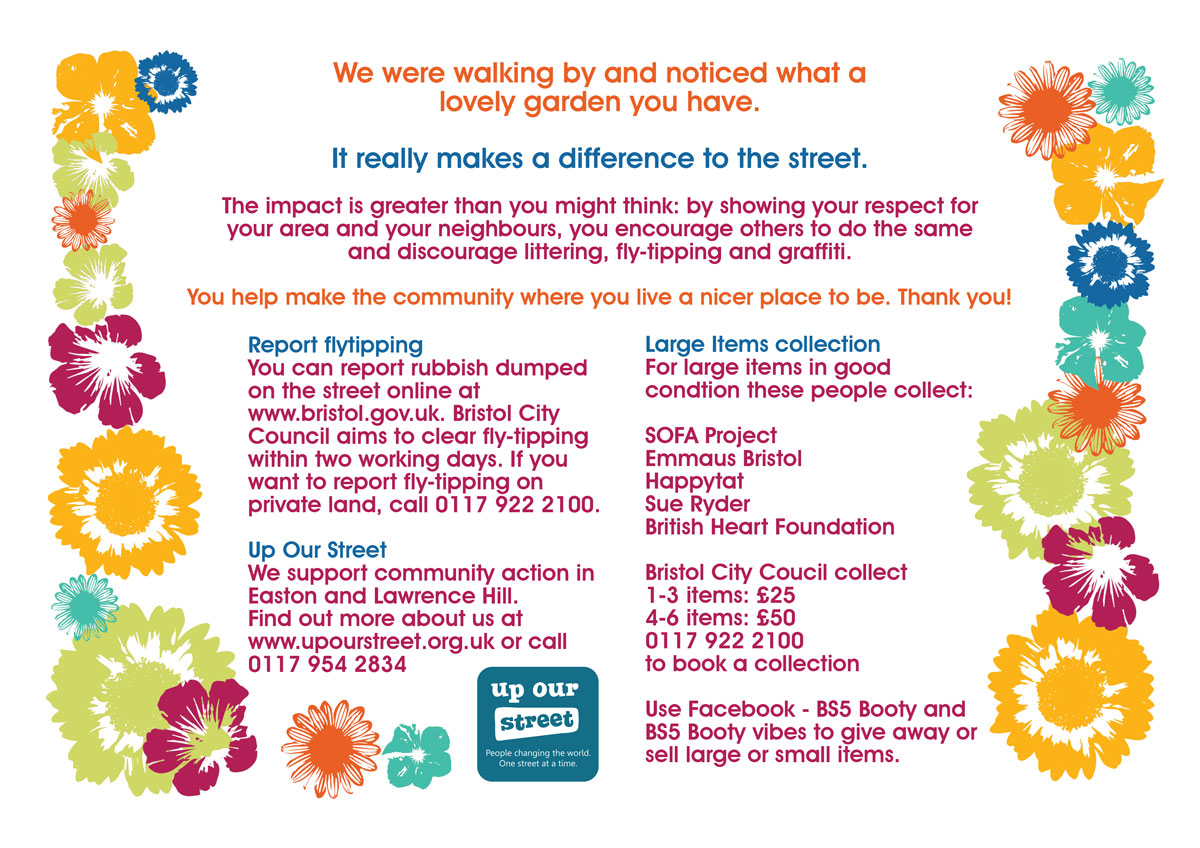 Personally, I’ve been stuck in a negative, complaining mindset about our area for so long it is healthier for me to think of it in terms of gratitude and altruism. I hope it works, it has been a dream job to work with Celia, Stacy and Khalil who have all been so enthusiastic and accepting of my ideas.

If you need a designer for your grotty neighbourhood just let me know 🙂 You can find me at www.nakedwebsite.co.uk as well as on less-stuff and I’m on Twitter if you want to see more pics of the project unfold. #stapeslove